My gold investing hasn't gone too well so far!

I think I need to remind myself why I have been buying the stuff. Either my reasoning will still feel valid and stop that dull pain I get when I remember I own this plummeting-priced asset... or I it will appear wrong-headed and I will need to re-evaluate what I am doing.

One of my reasons for buying gold was the possibility that it could rise in value if my income and my home fall in value. An attempt, I suppose, to turn my job, home and investments into an 'absolute return' fund - which sounds horrible and ambitious at the same time.

I didn't think of doing this until things were bad which meant I bought gold when everyone else was worried about the same thing. So it was expensive. Now people seem to be less worried and the price has fallen.

On this front the questions I ask myself are whether:

1. Will gold act as an insurance in bad times? My understanding is that hedging of any kind is very difficult and hedges are one/two dimensional while liabilities are three/four dimensional. Whether gold will perform as a hedge against property prices and job insecurity and inflation in London will depend on how gold is used by other investors, how they see it - and there are lots of reasons why investors might not see it in the same light that once they did: http://www.metal.com/newscontent/55937_will-gold-bounce-back-in-2014. But I suspect that even if I had only the purest unadulterated facts before me, the answers to these questions would not be clear.

Where does this leave me on the action front? I am a slow mover - as can be seen by my efforts on this blog - I miss boats and bandwagons. The slowness is unlikely to change which, I think, is why I need to be wary of accepting a falling price as a prevailing view on gold and sell. I will be forever behind the curve. But if I wait and see if the price recovers, what is my justification? Do I believe it will recover quicker than other assets? No, I just think I will never be able to answer those questions without having to rely on a whole new set of narratives, analysts, commentators, products and judgements. I think I would rather stay and watch the carnage here and hopefully learn from it (I think I want to buy some more soon - which makes me think I must have got a mental problem! But I think that was always my position I just hadn't realised it - that I would stay and watch this whether the price fell or rose? It looks like it.)

2. Should I be trading it to soften the price falls? I don't think I have the time, energy or desire to trade on a daily basis. If the time comes when I think I understand a situation I might do something like trade but at the moment I only get that desire to trade when things look bad, which is probably not a good time to do anything rash. Also trading removes the hedge.
From what I've seen, trading requires a different kind of knowledge. It is a more coal-face activity which revolves around finding acceptable answers/justifications for short-term activity. But having said this I don't invest a regular amount at a regular time so may be I trade anyway. I just take a look and if I have some money, and I feel it's not a very bad moment, I put the money in. May be I should do it more mechanically.

3.  Is wanting to know about gold a reason to invest? I used to write about it and I found it interesting on several levels. But I don't write so often but I am still interested. I thought owning some would help me pay attention. It did for a while, but my eyes got a lot bigger than my stomach! If I didn't know what to do I put £250 ('free of charge') into BlackRock Gold and General and my holding in this fund grew disproportionately. It is now the hardest hit of my holdings.

I also bought a very few Personal Assets Trusts shares. This was an attempt to diversify. I also think it remains faintly true to my interest in gold but more defensively - its manager Sebastian Lyon does still rate gold as a longterm bet.

Having written this I feel a little less worried. People are behaving as if the danger has passed and I don't feel it yet. I've lost a lot but I think I'm prepared to lose more because, even if everyone else is right to ditch gold, I don't think I'll lose out by sticking to building an understanding of a defensive or hedging position (one based around understanding gold). Perhaps the only consolation will be that it will be cheaper to experiment from now on! 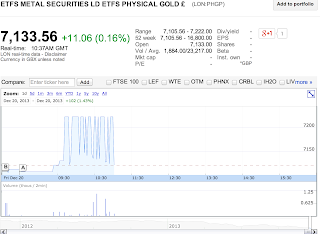 Latest from other gold related sites